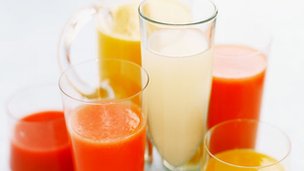 People underestimate the amount of sugar in drinks which are perceived to be "healthy", research suggests.
The Glasgow University study asked more than 2,000 people in the UK to estimate how much sugar was in a range of drinks.
While many overestimated the amount in fizzy beverages, they underestimated levels in smoothies and fruit juices.
The research also found soft drinks could be accounting for a large chunk of their recommended calorie intake.
The British Soft Drinks Association says the sugar in soft drinks is not hidden because beverages carry clear labelling of nutritional content, including calorie and sugar content.
Risk factor

The reasearchers asked participants to assess their weekly drinking habits.
Their answers suggested 450 calories a day were being consumed - a quarter of the daily limit for women and a fifth for men.
But it was the lack of awareness about the sugar content of drinks that caused concern.
The participants were asked to guess the number of teaspoons of sugar in a range of popular drinks.
They underestimated it for pure apple juice and orange juice, a caffeinated energy drink and a smoothie by between two and four teaspoons.
And for a pomegranate-based drink, they underestimated the sugar content by nearly 18 teaspoons.
Unsurprisingly, many participants were not taking the calorie content of their soft drinks into account when thinking about their diet.
The team warned that the over-consumption of soft drinks was contributing to obesity and was a major risk factor for conditions such as diabetes, high blood pressure, heart disease and stroke.
Lead researcher Prof Naveed Sattar said: "What you drink can be as damaging to the body as what you eat.
"There is no question that consuming too many sugar-sweetened drinks can greatly contribute to obesity.
"Some varieties of drinks such as pure fruit juices and smoothies, which are perceived as 'healthy' options, are also very high in sugar.
"For many people struggling with their weight, reducing their intake of such drinks and replacing with water or diet drinks would be a sensible first target to help them lessen their calorie intake."
Posted by EMILIANO do REGO at 5:52 PM