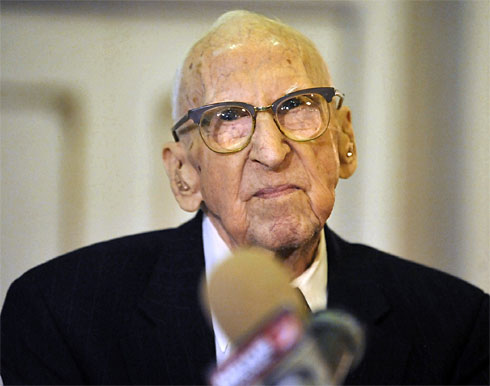 GREAT FALLS, Mont. — So what does the world's oldest man eat? The answer is not much, at least not too much.

Walter Breuning, who turned 113 on Monday, eats just two meals a day and has done so for the past 35 years.

"I think you should push back from the table when you're still hungry," Breuning said.

At 5 foot 8, ("I shrunk a little," he admitted) and 125 pounds, Breuning limits himself to a big breakfast and lunch every day and no supper.

"I have weighed the same for about 35 years," Breuning said. "Well, that's the way it should be."

"You get in the habit of not eating at night, and you realize how good you feel. If you could just tell people not to eat so darn much."

His practice of skipping supper began when he first moved to Great Falls from Minneapolis in 1978. He lived in the Yellowstone Apartments at the time and would walk downtown to Schell's in the Johnson Hotel or the Albon Club on the second floor for lunch.

In 1980, the Albon Club moved to the Rainbow Hotel, and the owners asked Breuning to be manager, which he did for 15 years.

"You can order anything you want, just like a restaurant," he said.

"Boy, I tell you that was good fruit. I ate the whole darn thing," Breuning said. "Peaches, pears, everything, it sure was good."

In addition to eating fruit every day, Breuning also takes a baby aspirin.

"Just one baby aspirin," he said, "but everybody gets that for their heart. That's the only pill I ever take, no other medicine."

And he drinks plenty of water.

"I drink water all the time," he said, and just a bit of coffee. "I drink a cup and a half of coffee for breakfast and a cup with lunch."

Breuning said he has been healthy all of his life and believes diet has a lot to do with it.

"If people could cut back on their normal weight, it wouldn't be quite so bad," he commented. "They just eat too much!"

Breuning remembers his family having a cow, pigs, chickens and a big garden when he was growing up, like most people did in those days.

"Everybody was poor years ago," he said. "When we were kids, we ate what was on the table. Crusts of bread or whatever it was. You ate what they put on your plate, and that's all you got," Breuning said.

Breuning recalls his mother being a good cook, though she died when she was 46 after an operation in Minneapolis. His wife was a good cook, too. They met when they worked in Butte for the railroad.

"Everything she made was good," Breuning said. "We used to have lots of card parties, and they would always say what a good cook she was."

While diet has contributed to his longevity, Breuning also believes that working hard was good for him.

"Work doesn't hurt anybody," he said, mentioning that he had two jobs, one working for the Great Northern Railway until he was 66 and the other as manager/secretary for the local Shriner's Club until he was 99.

These days, Breuning keeps busy talking with all of the people who visit the Rainbow Retirement Center interested in meeting the world's oldest man.

Though his vision doesn't allow him to read anymore, Breuning keeps his mind active by listening to the radio.

Breuning started eating out 35 years ago, but said he doesn't anymore.

"Once you get used to not eating in restaurants, you don't want to anymore," he said. Besides, he'd rather eat at home, at the Rainbow Retirement Center.

"They have a lot of good food right here," he said, "and good cooks."

Breuning celebrated his 113th birthday with not one, but two cakes, one chocolate and one vanilla. And for his birthday lunch he got his favorite: liver and onions.

Wikio
Posted by EMILIANO do REGO at 4:41 AM