Chris Chelios is the 2nd oldest player to ever suit up in NHL gear, playing into his late 40's and he still is in fantastic shape to this day. He appeared in the playoffs 24 times showing his dominance on the defensive end to get his team to the promised land every year. The 3x Defenseman of the Year trained with trainer NHL transformer T.R. Goodman, who trains over 25 NHL players. Goodman is a big believer of periodization, in which he never does the same workout day after day. Instead, he incorporates muscular endurance, muscular strength, and high performance adding lots of variety to his workouts to keep him motivated. Goodman focuses on ability and strength, not being concerned with aesthetics (although, it hasn't made his body appeal suffer one bit from the looks of it), Chelios trained for playing ability. 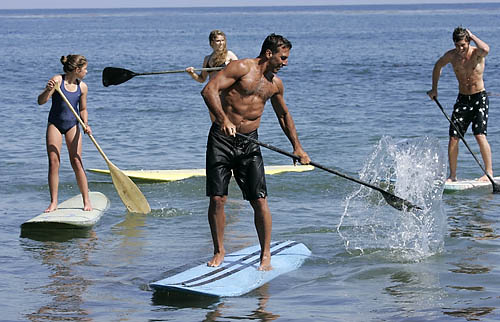 Goodman helped Chris with muscular imbalances, muscular weaknesses, balance, coordination, and chronic pain by including strength training, conditioning, and flexibility exercises breaking the routine up into three phases as dictated by AskMen. Regardless of the phase, each workout would last between 1.5 and 2.5 hours.

Muscular Endurance Phase:
Chelios built the "base" during this phase, before the more advanced high-performance training protocols were applied. He would perform reps between 15 and 25 reps to help the muscles adapt to creating a force output for a greater length of time and helps reduce the amount of fatigue experienced. He would rest approximately 30 seconds in between sets to allow his muscles enough time to recover, but keep his heart rate high to build general overall conditioning and endurance. The exercises performed during this phase typically included squats, leg extensions, leg curls, lunges, pull-ups. and bent-over rows.
Strength Phase:
This is the pahse where Chelios concentrated solely on building strength. He would work within the 6-8 rep range for each muscle group and placed a large emphasis on building core and abdominal strength. One caveat to notice here though is that T.R. was always mindful of form and never sacrificed it to put more weight on. He would focus on big compound movements here like squats, deadlifts, bench press, military dumbbell press, snatches, and a lot of free weight movements that incorporated several muscle groups.

Here is an example of one strength-based workout that Chelios was put through on a hot summer day: 60 minutes, no rest between sets, and a heavy emphasis on correct form. He did seven exercises, repeated continuously in sequence until the hour was over.

ONE-ARMED DUMBBELL ROW with 45 pounds- 8 reps each arm
DUMBBELL DEADLIFT with 35 pound dumbbells- 8 reps
CLOSE-GRIP PRESS with 90 pounds- 8 reps
DUMBBELL PRESS with 45 pound dumbbells- 8 reps
SINGLE LEG LUNGE with 20 pound dumbbells- 8 reps
LATERAL RAISES with 20 pound dumbbells - 8 reps
High-Performance Phase:
This is the phase where everything was tied together: strength and endurance with an emphasis on explosiveness, agility, and speed. This portion consisted of a lot of workouts based on coordination. Chelios would work out 6 days a week and this phase often included biking in the sauna, but the bulk of the program consisted of much more dynamic plyometric drills such as jump squats, clap push-ups, lateral bounds, and exercises on the stability ball, BOSU balls, beams, and cable pulleys. Previous Article
Wikio
Posted by EMILIANO do REGO at 6:20 PM