Nadal normally wakes up at 8:30 in the morning and plays tennis from 9:30 to 1:30 in the afternoon. He then trains in his gym from 4:30 to 7 in the evening. Nadal likes to use the Power Plate (pictured below), a vibrating platform. It consists of a vibrating base, which may vibrate up and down approximately 1 to 2 millimeters. The Power Plate uses whole-body vibration, or WBV, to contract muscle 30 to 50 times per second rather than once or twice per second without it. According to Power Plate’s website, their product “offers a host of benefits, ranging from an immediate improvement in blood circulation, to a variety of other measurable outcomes: such as increased muscle strength and flexibility, improved range of motion, decreased cellulite, increased bone mineral density, reduced pain and soreness and faster recovery.”

The 6’1, 188 lb. Nadal also uses resistance bands for his workout. Resistance bands allow for variable resistance- the more the band is stretched during the concentric (positive) phase of each rep, the more the resistance. During the eccentric (negative) phase, resisting the pulling action puts greater stress on the muscle. These resistance bands are specifically beneficial for the shoulder and rotator cuff, one of the most important muscles that tennis players use.
In terms of his flexibility routine, Rafa believes it is crucial to stretch. He has his personal physical therapist stretch him everyday. Furthermore, Nadal trains differently for specific court surfaces. For example, Wimbledon is played on grass and therefore the tennis ball bounces lower than normal. As a result, Nadal focuses on special exercises for the lower part of the body since he tends to be closer to the ground. 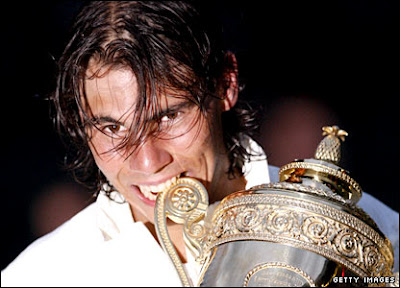 As many people have wondered, Nadal’s left arm is actually bigger than his right, in what one would call a “Popeye arm”. Even Nadal confirmed it, telling Men’s Fitness “My left arm is much more developed than my right arm. This is because I play lefty and that's sort of my gym, the tennis court. That's where I have fun.” Even though he has bigger biceps, triceps and forearms than his fellow tennis players, Nadal says he does the same workouts that any tennis player would do. When it comes to his diet and eating habits, Nadal stays away from eating meat or heavy meals. He is more careful with what he eats leading up to a match. He also has a love for chocolate.

Rafael Nadal, nicknamed “The King of Clay” is known as one of the greatest clay court players of all-time, consistently dominating rival and tennis legend Roger Federer on clay. So far, the Spaniard has won nine Grand Slam singles titles and is establishing himself as one of the all-time tennis greats.
Wikio
Posted by EMILIANO do REGO at 7:46 AM