By Tom RostanceBBC Sport at the Olympic Park 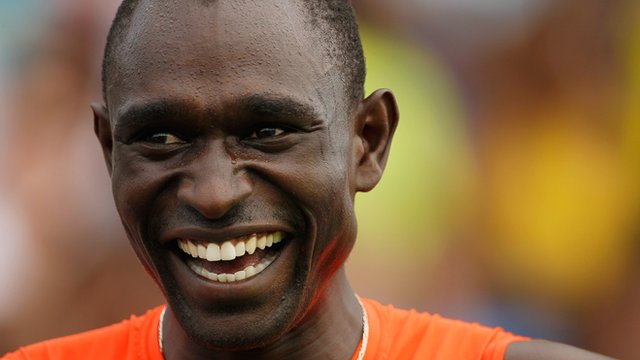 For the 80,000 fans lucky enough to have tickets for Thursday evening's athletics session at the Olympic Stadium, there is one stand-out name they are all there to see.

Usain Bolt is a global star who could grab his second gold medal in four days in the 200m final later on - but he is not the only world-beater on display.

Lord CoeChairman, London 2012
"David Rudisha is the outstanding 800m runner of his generation. And I will say it, probably on paper the most impressive track and field athlete at these Games - I would say that, wouldn't I?"
It is, historically, not an easy record to break. The time of 1:41.73 set by London Games chief Sebastian Coe in 1981 stood for more than 16 years before it was matched, and then improved, by Kenyan-born Dane Wilson Kipketer. He and Rudisha remain the only men ever to better Coe's figures, and no-one except the Kenyan has broken the 1:43 barrier this year.
Yet remarkably there are even hopes that Rudisha could become the first man to break 1:40 in the final.
Whatever the time, Foster is in no doubt that he will deliver gold.
He said: "He likes to run from the front. He doesn't like trouble around him and he is outstanding enough to not have to worry about people around him.
"Nobody can touch him. He's a beautiful athlete to watch."
Rudisha's father, Daniel, was also an athlete and took silver in the 4x400m relay in the 1968 Games in Mexico City.
Rudisha told BBC Sport: "My father is a big inspiration to me - he is the reason why I am here, why I am running.

The fastest 800m ever

Posted by EMILIANO do REGO at 6:39 AM