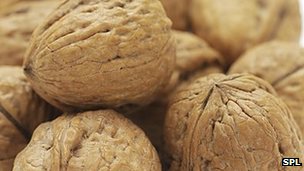 By Anna-Marie Lever
Health reporter, BBC News
Eating around two handfuls of walnuts a day improves sperm health in young men, a study in the journal Biology of Reproduction suggests.
Sperm shape, movement and vitality improved in men who added walnuts to their diet over 12 weeks.
The fatty acids found in these nuts are thought to have helped sperm development. It is not known if this would help improve male fertility.
About one in six couples are infertile, with 40% of these due to a male factor.
Dr Allan Pacey, senior lecturer in andrology at the University of Sheffield said: "It would be relatively easy to poke fun at studies like this, but there is increasing evidence to show that aspects of a man's diet can affect the number and quality of sperm produced by his testicles."
The researchers say the next step is to work with couples who are attending infertility clinics to determine if placing sub-fertile men, with poor semen quality, on a walnut diet results in better success conceiving.
It is thought that infertility in men may be a result of too few sperm being made, or that the sperm have poor swimming ability, size or shape.
Walnut supplement
This study involved 117 men between the ages of 21 and 35, who were divided into two groups. One group added 2.6 ounces (75 grams) of whole-shelled walnuts to their daily diet.
The other group continued their usual diet but avoided eating tree nuts. Both groups ate a typical Western-style diet.
Lead author, Prof Wendie Robbins from UCLA's Fielding School of Public Health said: "We found a significant improvement in sperm parameters in the group that consumed the walnuts.
Healthy sperm
"The men who ate no tree nuts saw no change."
Sperm quality improved in terms of concentration, vitality, movement, shape and chromosome abnormalities.
Dr Pacey said: "The study has been well executed and my only criticism would be that the men in the walnut-eating arm of the trial could have altered other aspects of their behaviour to give the results shown in the paper.
"A better trial would be to produce tablets of walnut extract that looked identical to a placebo so that the study was completely blind.
"In spite of this, the results of the study show a small but statistically significant improvement in sperm health."
These benefits may be down to the fatty acids in the nuts.
Co-author Catherine Carpenter, from the UCLA Centre for Human Nutrition said: "Walnuts provide a particularly rich source of a-linolenic acid, a natural plant source of omega-3, which we suspect may have been responsible for the improvements we observed."
The walnuts for the study were supplied by the California Walnut Commission and the study was funded by the UCLA Fielding School of Public Health's Centre for Occupational and Environmental Health.
Posted by EMILIANO do REGO at 5:16 PM